It's the news "Friends" fans have been waiting for: On Feb. 21, it was announced that the cast of the hit '90s sitcom that ended in 2004 — Jennifer Aniston, Courteney Cox, Lisa Kudrow, Matt LeBlanc, Matthew Perry and David Schwimmer — are reuniting for an unscripted special on the streaming service HBO Max, which launches in May. Variety reported that the stars, who famously banded together to score $1-million-per-episode paydays at the end of the 10-season sitcom's run, will earn at least $2.5 million each for their participation in this special, which will tape on the show's original soundstage on the Warner Bros. Studio lot in Burbank, California. HBO Max will also be the home for streaming all 236 episodes of the NBC show.

Gayle King found herself on the receiving end of major backlash in early February after her network aired a short segment of her interview with WNBA star Lisa Leslie on "CBS This Morning." In the clip, the host asked the basketball star if late basketball star Kobe Bryant's "legacy is complicated" due to a 2003 rape charge that was ultimately dropped (he settled with his accuser out of court). This enraged fans, who believed it was too soon after Kobe's January death to bring up those allegations. Gayle took to Twitter on Feb. 6 to set the record straight, writing: "If I had only seen the clip that you saw, I would be extremely angry with me too. I am mortified, I am embarrassed and I am very angry. Unbeknownst to me, my network put up a clip from a very wide-ranging interview, totally taken out of context and when you see it that way, it's very jarring." She added her frustrations with the network, writing, "For the network to take the most salacious part — when taken out of context — and put it up online for people who didn't see the whole interview is very upsetting to me and that's something I'm going to have to deal with with them. There will be a very intense discussion about that." Ultimately, she wanted fans to know she never meant to offend, concluding with: "The last thing I would want to do is disparage [Kobe] at this particular time, and I hope people understand that." Bestie Oprah Winfrey and comedian Amy Schumer were among the stars who voiced support for Gayle on social media.

It's the end of an era for the stars of "Modern Family." The hit ABC sitcom wrapped its 11th and final season on Feb. 21. Its stars including Sofia Vergara, Julie Bowen and Jesse Tyler Ferguson posted emotional and funny photos and videos on social media all month long as they counted down to that last taping. "Our last table read😪 sad because it's ending but so grateful and happy to have been able to be part of this family. It has [been] more than I ever dreamed of or deserved❤️ Gracias my Modern Family🍾🍾🍾 #11years," Sofia wrote earlier in the month. On the 21st, she shared a video of the cast and crew singing Green Day's emotional "Good Riddance (Time of Your Life)" together on the set. The finale episode airs on April 8. Sofia didn't waste any time lining up another gig…

"CSI" fans, listen up! On Feb. 10, Deadline reported that CBS is in talks for a "CSI" event series to mark the 20th anniversary of the show's October 2000 premiere. The revival would be set in Las Vegas and would serve as a sequel to the original series. The outlet reported that the powers that be are hoping original cast members like William Petersen and Jorja Fox will reunite for the project.

Chris Pratt is returning to TV

Chris Pratt is heading back to the small screen! On Feb. 4, The Hollywood Reporter revealed that Chris is eyeing a return to television with "The Terminal List," a conspiracy thriller based on a Jack Carr novel of the same name. Not only would he star as a Navy SEAL named Reece, but the "Parks and Recreation" alum would be developing the drama, which is being envisioned as a multiple-season scripted series, with his former "The Magnificent Seven" director Antoine Fuqua, who would direct the pilot episode. The show centers around Reece's character after his platoon is ambushed during a high-stakes cover mission, leaving Reece to return home with "conflicting memories of the event and questions about culpability" where he discovers "dark forces working against him."

This season's "The Bachelor" contestant Victoria Fuller made headlines in February after her ties to a misguided marine conservation campaign resurfaced. The contestant on Peter Weber's season once modeled clothing featuring the slogan "White Lives Matter" for an organization aimed at preserving white and blue marlins that also sold a T-shirt featuring a design modeled after the Confederate flag. Victoria was quick to defend herself in January, writing on Instagram, "It would be nice for you to gather all facts before jumping to bash someone. The company 'We Love Marlins' is in support of catching white, blue and black marlins and releasing them back into the wild. In regards to a sensitive topic, I come from a very diverse background and am in support of all races! Virginia Beach is a VERY large fishing town where Marlin tournaments are held every year! Glad to clear this up." In February, though, it seemed she'd had a change of heart as she posted a lengthy apology on her Instagram Stories, noting, "I would like to specifically apologize to people of color that are affected by racism daily. It was never my intention to add fuel to the racial fire in this country."

Patrick Dempsey has a new pilot on the way

If you've been missing McDreamy on your small screen, we have some good news! The Wrap reported on Feb. 4 that Patrick Dempsey will star on the CBS political drama "Ways & Means," which has been ordered to pilot for the 2020 development season. He'll also serve as an executive producer on the show, which centers around a Congressional leader working with a young Congresswoman from the opposing party to try to save American politics.

CBS canceled multiple tapings of "The Price is Right" following the Feb. 15 death of host Drew Carey's former fiancée, Dr. Amie Harwick, as the grieving comedy star struggled to deal with the devastating news. Police say the family and sex therapist was murdered during an altercation with Gareth Pursehouse, a man she dated nearly a decade ago, at her Hollywood Hills home. On Feb. 18, Drew took to Twitter to highlight a Change.org petition aimed at reforming domestic violence legislation. Drew also released a statement about Amie, from whom he split in late 2018. "Amie and I had a love that people are lucky to have once in a lifetime," he said, calling her a "positive force in the world, a tireless and unapologetic champion for women and passionate about her work as a therapist."

Liev Schreiber speaks out after "Ray Donovan" is canceled

Goodbye, Ray! Showtime announced on Feb. 4 that "Ray Donovan" has been canceled — so the finale of season 7 that aired last month will now serve as the series finale. Liev Schreiber, who's starred as the titular fixer since 2013, took to Instagram on Feb. 12 to address the sad news, writing, "It's hard to describe how amazing it feels to those of us in the Ray Donovan family who have been lucky enough to experience the overwhelming love and support that all of you have expressed for our show since the news broke that Ray would not return." He also hinted that it might not really be the end, adding, "What's even more incredible is that it seems your voices have been heard. Too soon to say how or when, but with a little luck and your ongoing support, there will be more Ray Donovan. So to all the Donofans who got their bats out and beat the odds. Thank you."

Tarek El Moussa gets a solo show on HGTV

Tarek El Moussa is getting a solo show! HGTV announced on Feb. 4 that the realtor, renovation expert and host will be starring on "Flipping 101 w/ Tarek El Moussa" beginning on March 5. The show will follow the "Flip or Flop" star as he mentors first-time house flippers. "I'm sharing every lesson I've learned to help novice flippers survive their projects unscathed," Tarek said. "I'm going to show them how to take the worst of the worst and make a mountain of money turning their homes into the best on the block."

"Good Times" star Ja'net Dubois died of natural causes at her home in Glendale, California, on Feb. 17. She was said to be 74… Hollywood scion Jason Davis (pictured), 35, who voiced Mikey Blumberg on the Disney Channel cartoon "Recess" and appeared on "Celebrity Rehab with Dr. Drew" while battling a heroin addiction in 2010, died in his Los Angeles home on Feb. 16… British "Love Island" host Caroline Flack (pictured), who made headlines in the States for her long-ago romances with Prince Harry and a young Harry Styles, died by suicide at her London on Feb. 15. She was 40… Lynn Cohen (pictured), who played Miranda's Ukrainian housekeeper, Magda, on "Sex and the City," died in New York City on Feb. 14 at 96… Emmy-nominated "Night Court" and "Women of Brewster Place" actress Paula Kelly died from chronic obstructive pulmonary disease in Whittier, California, on Feb. 8. She was 77… "M*A*S*H" co-creator and six-time Emmy winner Gene Reynolds died in Burbank, California, on Feb. 3. He was 96.

In light of information that surfaced in the Netflix docuseries "Who Killed Malcolm X?" the Manhattan District Attorney's Office announced on Feb. 10 that it will be teaming up with the Innocence Project, a nonprofit that works to exonerate the wrongly convicted, to reinvestigate the assassination of the civil rights activist and leader. The Netflix series highlights how two of the men convicted following the 1965 killing — Muhammad Abdul Aziz, who was released on parole in 1985, and Khalil Islam, who died in 2009 — long maintained their innocence, and that a third man, Mujahid Abdul Halim, admitted he played a role in the assassination but has insisted that the other two "had nothing to do with it."

Jenelle Evans' contract with MTV comes to an end

Controversial "Teen Mom" star Jenelle Evans announced on Feb. 5 that she's finally moving on from the MTV franchise. Jenelle — who was let go in April 2019 after her husband shot and killed their family dog and she continued to support him — told E! News that she's "officially out of contract with MTV in April." Jenelle claimed she was happy about her contract coming to an end, explaining, "That was the only thing I was waiting on to move forward. Once April comes around, I can start talking to other networks, thank God!"

"The Good Doctor" gets renewed for a fourth season

Great news for fans of "The Good Doctor." ABC announced on Feb. 10 that the show will return for a fourth season later this year. Freddie Highmore has starred as autistic surgeon Dr. Shaun Murphy, who has savant syndrome, since 2017. 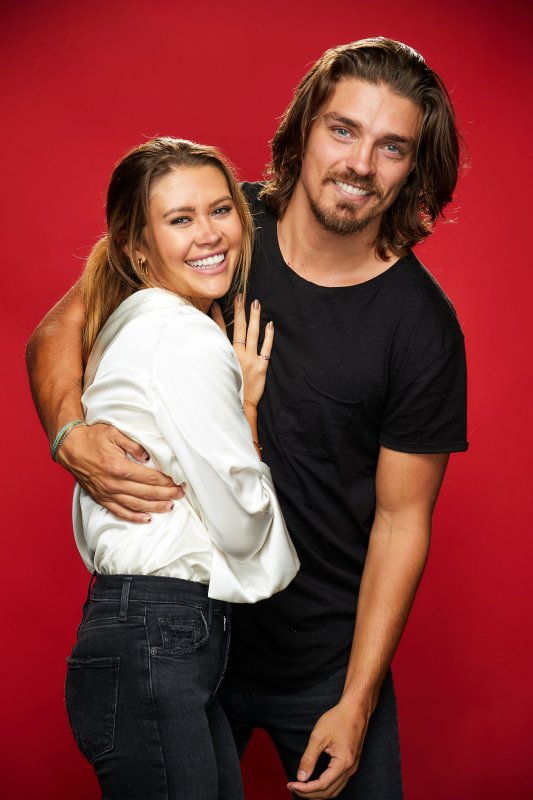 Up Next Bachelor Nation Romance Report