Each year, the Golden Globe Awards honor the best in TV and movies while bringing out the best in red carpet fashion. In honor of the first award show of 2020 — the 77th Annual Golden Globe Awards air on Jan. 5 — Wonderwall.com is going back to 1990 to take a look at the trends and red carpet styles that year, starting with Julia Roberts. The "Pretty Woman" star — who won a best supporting actress Golden Globe for her work in "Steel Magnolias" that year — went for a menswear look: an oversized gray suit with a purple tie. Keep reading to see what more stars wore to the Golden Globes 30 years ago…

Demi Moore accompanied husband Bruce Willis to the 1990 Golden Globes when he was nominated for his work in "In Country." Demi wore a slinky white gown with sparkles, which she covered with a sheer purple wrap.

In January 1990, Suzanne Somers walked the Golden Globes red carpet in a fitted olive green dress with long sleeves and shoulder pads. The gown also featured embellishments that made it look like she had ivy crawling up her body.

At the 47th Annual Golden Globes, Cybil Shepherd showed up in a sheer full-length gown with long sleeves. The fitted dress featured elaborate gold leaves all over, strategically covering her up.

Audrey Hepburn received the Hollywood Foreign Press Association's prestigious Cecil B. DeMille Award at the 1990 ceremony. The actress accepted the trophy in a white silk dress with long sleeves, which she accessorized with a pair of oversized diamond-shaped earrings.

Sally Field attended the 1990 Golden Globes — where she was nominated for her work in "Steel Magnolias" — wearing a short yellow-and-green floral-print dress. Sally added a matching sheer jacket on top and dark sheer pantyhose underneath.

Joan Collins showed up to the 1990 Globes in a tight black skirt and black tank top. To jazz up the basic-black look, Joan wore a black-and-white blazer and added big, sparkly accessories like the oversized earrings seen here.

"China Beach" actress Dana Delany was a vision in red at the 1990 Golden Globes. The nominee wore a tight red dress with a corresponding red short-sleeved jacket. She broke up the red with a black purse and pair of black pumps.

Jane Seymour, seen here with ex-husband David Flynn, looked more like a bride than a nominee at the 1990 Golden Globes. The actress, who was nominated for her work in "War and Remembrance" that year, wore a one-shouldered white gown with white flower appliques and pleats starting at the knee.

Michelle Pfeiffer took home a Golden Globe for her performance in "The Fabulous Baker Boys" in 1990 wearing a simple black dress with a wide neckline and ruched sleeves.

Kirstie Alley, seen here with ex-husband Parker Stevenson, was nominated for her performance on "Cheers" in 1990. She wore an all-black look to the Globes and topped it off with a beaded and fringed jacket.

"Murphy Brown" star Candice Bergen walked the red carpet at the 1990 Golden Globes in an all-white look. The nominee wore a casual, oversized white tunic with two sets of stripes, white pants and white flats and carried a white wrap and clutch.

Deidre Hall also wore all white to the 1990 award show, but in a much fancier way than Candice Bergen. The soap opera star donned a white gown with heavy feathering on top with white satin pumps and carried a sparkly clutch to match her jewels.

Debbie Allen choose a short, strapless pink dress with a bolero jacket and plenty of sparkly black beading for the 1990 show.

Katherine Helmond wore a gold jumpsuit to the Beverly Hills-based award show. Her look featured squiggles of gold sparkles that matched her gold jewelry and clutch.

Nominee Tracey Ullman wore a shiny and colorful polka-dot dress with puffed shoulders to the 47th Annual Golden Globes. The comedian accessorized the funky look with yellow tights and a large black bow in her hair.

"Driving Miss Daisy" star Jessica Tandy took home a Golden Globe in 1990 wearing a loose fitted white dress belted at the waist. She topped the ensemble off with a matching creamy white jacket that was nearly floor length. 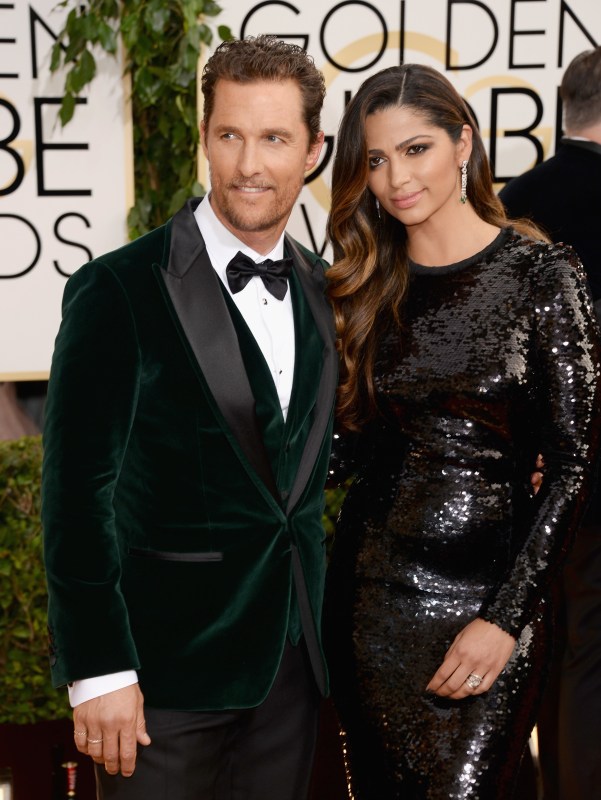