Mandy Moore has been through a ton of phases throughout her successful career. From her bubblegum "Candy" pop days to her acting in teen favorites like "A Walk to Remember" and "Saved!" to her Disney princess debut, we've seen and loved Mandy through it all. These days, Mandy is starring as Rebecca Pearson on the hit TV show "This Is Us," which we absolutely love! In celebration of Mandy's 33rd birthday on April 10, 2017, Wonderwall.com is sharing 12 things you might not know about her (but should!). Keep reading for more Mandy…

RELATED: "Blades of Glory" cast: Where are they now?

Mandy Moore stands tall and proud at 5-foot-10, but she wasn't always so comfortable with her stature. "I went through a big growth spurt and for a period of time was taller than a lot of my friends," Mandy told Glamour. "I used to hunch over and complain to my parents about sticking out or feeling awkward in my body. My mom, who is about 8 inches shorter than me, never failed to mention how envious she was of my height and that it was a beautiful quality." Beautiful, indeed.

3. She's friendly with her exes

Mandy Moore has dated several talented celebs including Zach Braff, Andy Roddick and Wilmer Valderrama, and they're all still on good terms. She told Seventeen Magazine, "People are in your life for a reason, and I don't think you ever stop caring about people you've been close to. You don't ever stop supporting them — well, I don't at least. From Andy [Roddick] to Zach [Braff] to Wilmer [Valderrama], all those people."

Mandy is a strong supporter of equal rights for women. In addition to joining in on the Los Angeles Women's March on Jan 21, 2017, Mandy also supports socially conscious brands like FashionABLE. On March 28, Mandy stepped out for an event held in support of Equal Pay Day. Girl power!

6. She's a glass-half-full kind of person

Even though she went through a tough divorce, Mandy Moore was still able to grasp the light from a dark situation by focusing on her career. She was married to singer-songwriter Ryan Adams for six years before filing for divorce in early 2015. She told E! News, "I think I spent a good portion of the last years of my life really pouring all of my energy into my life and relationship, and now that that's sort of not part of my life anymore, it's not a coincidence to me that things sort of opened back up and I'm able to focus back on myself again." She's found love again too: Mandy has been dating Dawes frontman Taylor Goldsmith since July 2015.

7. She embraces her unconventional family experience

Even though Mandy Moore is a bona fide movie and television star, she's also really relatable and compassionate. In an interview with Byrdie, Mandy opened up about her unconventional family experience. She said, "I've never really talked about this but my parents are divorced. My mother left my father for a woman. And both of my two brothers are gay." Today, the actress added, everyone in her family is "exactly where they should be. Everyone's so much happier, richer and more fulfilled being their authentic selves."

Mandy Moore is continuously mistaken for the choreographer of the same name who worked on "La La Land," which is funny because the singer-actress says she's actually a terrible dancer! The "This Is Us" star told Jimmy Fallon on "The Tonight Show" on Feb. 24, 2017, "I am the worst dancer, which is the irony here. I have no rhythm. Anybody who watched my music video when I was 15 for 'Candy' can see that I'm the worst dancer on the planet."

10. She accepts her past

Mandy Moore shot to fame at a very young age with the unforgettable 1999 single "Candy." We all know being a teenager is tough, especially when you're going through changes in the public eye. "I started when I was 15," Mandy told People. "I had no idea who I was or what I was doing." Because of that, she added, she'll rightly give herself "a bit of a pass."

Mandy Moore and Minka Kelly are true besties. When Mandy was going through her divorce with Ryan Adams in 2015, Minka was right by her side for shopping trips and girls retreats. Minka and Mandy are so close, they also share an ex: Wilmer Valderrama! Mandy told Andy Cohen, "We're all close friends. It's not weird. I love them both, and I've been friends with him for 15 years. We're like, very, very close friends."

Although Mandy Moore is only turning 33 years old, she's somewhat of an old soul. She prefers nights in on the couch instead of wild Hollywood parties. Mandy told WWD, "I'm, like, a hermit. I'm slightly geriatric. I just want to be home and I want to watch my shows and be in my sweatpants." 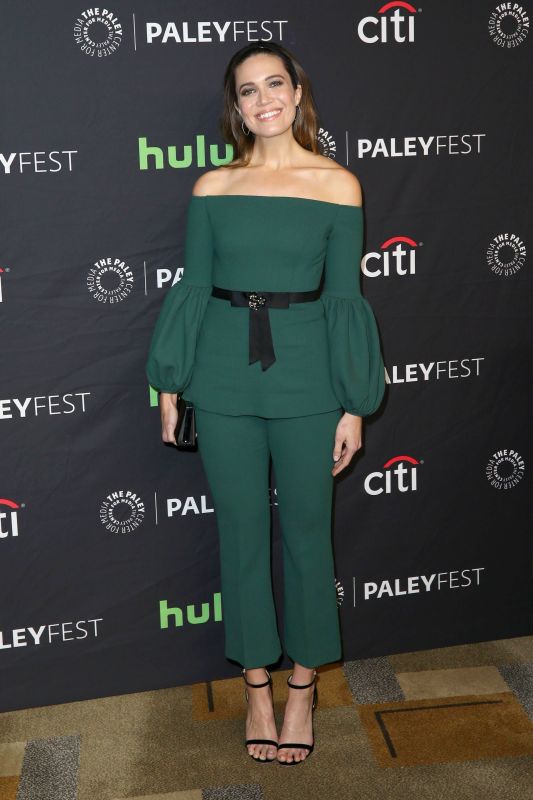