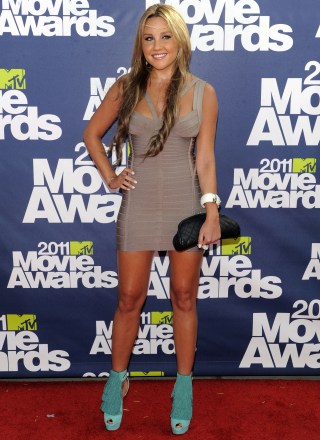 Share Tweet Pin Email
Amanda Bynes has gone from being called a young Gilda Radner/Carol Burnett to a cautionary tale. The dentist's daughter started taking comedy classes at 7. At 9, while studying at the Laugh Factory, she interviewed with producers of Nickelodeon's kid-improv series All That. She was hired, immediately became the breakout funny everygirl a nd got her own self-titled show to headline by 1999. Bynes, who dated her Amanda Show costar Taran Killam, made the move to the big screen (Big Fat Liar) and primetime (CW's What I Like About You opposite Jennie Garth) in 2002. She picked up a costar boyfriend, Nick Zano, on that series as well. She left TV for movies full-time, having starred in a string of teen hits like What A Girl Wants, She's The Man, and Hairspray. She debuted a clothing line called Dear by Amanda in 2007 and had a super-short dalliance with Doug Reinhardt in 2008. She had an even shorter love affair with retirement in 2010 when she announced on Twitter she was quitting acting. Weeks later she posted that she'd "unretired," adding a link to the trailer for her new film with Emma Stone, Easy A. Things haven't been quite so sunny for the California girl since. Work has been sparse, rumors of partying quite the opposite. In 2012, she got two DUIs in three months, was charged by the L.A. City Attorney's office with two counts of hit-and-run related to separate incidents and could be facing jail time.