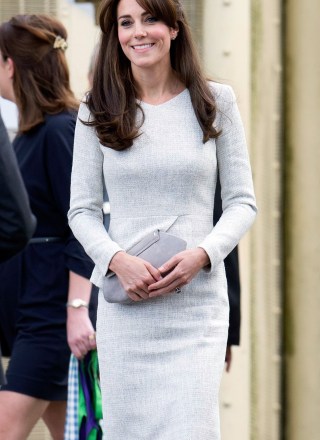 Kate Middleton was born a commoner — well as common as the child of self-made millionaires who was schooled at prestigious and pricey Marlborough College and University of St. Andrews can be considered. While studying art history and playing field hockey at the Scottish college in 2001, she met Prince William, the future King of England. A year later, they became allegedly platonic roommates with two of his pals from Eton College, but tabloids were abuzz with rumors regularly until 2004 when they went public during a Swiss ski trip. In 2006, the princess-in-waiting, then an accessories buyer for British clothing chain Jigsaw, attended her first royal engagement with the Queen present, her beau's graduation from the Royal Military Academy. After an eight-year romance and one three-month split in 2007, he proposed with his mother's ring while vacationing in Kenya and she became the Duchess of Cambridge after a lavish and much-watched wedding at Westminster Abbey on April 29, 2011. She quickly settled into her royal duties (i.e. North American tours, charity events, ambassador at the London Olympics), her role as much-copied fashion maven and the target of photo scandals. The heir to the throne, son George Alexander Louis, was born in July 2013.