Are you ready to see — or rather, hear — Kelly Clarkson on TV and the big screen? On May 1, 2019, Kelly will be hosting the Billboard Music Awards on NBC. Up next? Kelly will be featured in "Ugly Dolls" landing in theaters on May 3. It features Kelly as the voice of Moxy, an adorable pink sock puppet who believes she and other imperfectly perfect dolls deserve a chance to find children to love them. In honor of her big week, Wonderwall.com is taking a look at Kelly's biggest career moments. Keep reading for more…

RELATED: A guide to all the live-action remakes of animated films

It all began on Sept. 4, 2002, when Kelly Clarkson was crowned the very first winner of "American Idol." Kelly won the title, besting runner-up Justin Guarini, after taking everyone's breath away with her performance of three songs including "A Moment Like This," which went on to become her first single.

RELATED: "American Idol" contestants: Where are they now?

Less than two weeks after winning "American Idol," Kelly Clarkson's first single, "A Moment Like This," debuted on the airwaves, bringing with it her next major career high. After just three weeks on the charts, her single hit No. 1 on the Billboard 100 and went on to become the best selling single of the year.

RELATED: Actors you forgot made music

Kelly Clarkson's successes kept coming at an incredible speed. On April 15, 2003, her debut studio album, "Thankful," dropped. It reached No. 1 on the Billboard 200. The album included songs like "A Moment Like This" and "Before Your Love" from her "American Idol" finale performance as well as the hit single "Miss Independent," which rose to No. 1 on the Hot 100 singles chart and stayed there for six long weeks.

Although Kelly Clarkson and Justin Guarini's 2003's rom-com musical "From Justin To Kelly" was a certifiable bomb at the box office, it was also an important step in Kelly's career. She proved she wasn't afraid to take chances, even if her movie was panned by critics and viewers alike.

Less than a year after winning "American Idol," Kelly Clarkson had two hit singles on the airwaves and was already working on her next album. Making the year even sweeter? Kelly's video for her song "Miss Independent" was nominated for three MTV Video Music Awards — best new artist, best pop video and the coveted viewer's choice award.

On Sept. 28, 2003, Kelly Clarkson added TV guest star to her ever-impressive list of accomplishments when she appeared on an episode of the musical-drama series "American Dreams." On the show, Kelly donned a brunette bouffant and a smile to play Brenda Lee, a real-life vocalist from the 1960s. The following year, Kelly returned to the series once more as Brenda for the episode "Tidings of Comfort and Joy."

2004 would be the year that marked one of Kelly Clarkson's greatest career achievements, all thanks to the release of her second studio album, "Breakaway." It featured some of Kelly's biggest hit singles to date including "Since U Been Gone," "Because of You" and the title track and went on to sell more than 12 million copies worldwide and score platinum status in 17 countries. Not only was the album a commercial success — it was also a chart topper, reaching No. 3 on the Billboard 200 at its peak and remaining in the top 20 for more than 61 consecutive weeks.

By 2004, Kelly Clarkson had joined an impressive club — she earned her first Grammy nomination (for best female pop vocal performance for her hit song "Miss Independent"). Although she ultimately lost to Norah Jones, it proved she was more than just a reality TV star.

Kelly Clarkson's three MTV Video Music Award nominations in 2003 turned into two wins on Aug. 8, 2005, when she scored Moonman trophies for best female video and best pop video for "Since U Been Gone." And no, that's not the gleam of excited sweat you see on Kelly here — she was literally drenched from her VMAs performance, which included water streaming down on the stage.

2006 was the year Kelly Clarkson went from Grammy-nominated artist to two-time Grammy winner. At the 48th Annual Grammy Awards that February, Kelly won prizes for best pop vocal performance for her song "Since U Been Gone" and best pop vocal album for "Breakaway."

In 2007, Kelly Clarkson and Reba McEntire recorded a duet of Kelly's song "Because of You." Not only did it pair Kelly with one of her country music idols, but it also scored the duo another chart-topping hit as their remake reached No. 2 on the Hot Country Billboard chart. That same year, Kelly also made a guest appearance on Reba's self-titled comedy series. Fun fact: Years later in 2013, Kelly married Reba's stepson, Brandon Blackstock!

In 2009, Kelly Clarkson released her fourth studio album, "All I Ever Wanted," which debuted at No. 1 on the Billboard 200. Its lead single, "My Life Would Suck Without You," also topped the charts and made a dramatic climb from No. 97 to No. 1 in just one week — a record-breaking achievement in the music industry.

In 2010, Kelly Clarkson teamed up with country music star Jason Aldean to perform a duet of his song "Don't You Wanna Stay" at the 44th Annual Country Music Association Awards. Their performance was so widely revered, it led the two to record a studio version of the song, which was later nominated for numerous awards. It won the best vocal event of the year prize at the Academy of Country Music Awards in 2011.

They say a Super Bowl performance can either make or break a star. Thankfully, Kelly Clarkson's Feb. 5, 2012, delivery of the national anthem at Super Bowl XlVI in Indianapolis was so good, it only enhanced her reputation. As she hit every note with stunning ease, Kelly's rendition even managed to make a few football players teary-eyed.

Kelly Clarkson — seen here performing on "The Voice" in 2012 — appeared on the show earlier that year during Season 2 as a contestant adviser and mentor for coach Blake Shelton's team. She did four episodes of the series during her "Stronger" tour run to support her successful fifth studio album of the same name. But she'd soon be back for much more…

In 2013, Kelly Clarkson had to clear some room on her awards shelf after she took home yet another Grammy, this time for best pop vocal album for her chart-topping fifth studio album, "Stronger," which included hits like "Stronger (What Doesn't Kill You)" and "Mr. Know It All." It reached No. 2 on the Billboard 200 and was certified platinum in the States.

There's a certain level of success any celebrity has to achieve before they can host their very own holiday special. On Dec. 11, 2013, Kelly Clarkson crossed that milestone when she hosted "Kelly Clarkson's Cautionary Christmas Tale" on NBC. Featuring an all-star cast that included friend and music icon Reba McEntire, comedians Robin Williams and Ken Jeong, singer Natalie Cole and more, Kelly's hour-long program included plenty of laughter, holiday cheer and melodic performances to make the season bright.

Following her marriage to Brandon Blackstock in 2013 and the birth of her first child, River Rose, in 2014, Kelly Clarkson was at the center of some unkind remarks about her body while touring in support of her seventh studio album, 2015's "Piece By Piece." The beautiful singer destroyed her critics, preaching a message of body positivity while performing hits like "Heartbeat Song" — a track that helped bring the album to No. 1 on the Billboard 200 and earned her two Grammy nominations. Incidentally, the album would also mark the end of a long and often tumultuous relationship with RCA Records.

Did you know that Kelly Clarkson is also a New York Times bestselling author? In 2016, Kelly debuted the children's book "River Rose and the Magical Lullaby," which is named after her daughter, River Rose Blackstone. Kelly's whimsical tale is a lyrical lullaby that sends an excited little girl on a grand dream adventure. The following year, Kelly added a second holiday-themed book to the collection: "River Rose and the Magical Christmas."

A year after giving birth to her second child, son Remington Blackstock, Kelly Clarkson played Leah the horse in the 2017 animated big-screen Christmas adventure "The Star." Joining an all-star cast of voices including Oprah Winfrey, Keegan-Michael Key, Aidy Bryant and more, Kelly gave life to the lovable equine that witnessed the birth of the Messiah. It wasn't Kelly's first voice role, as she'd previously played an animated version of herself on an episode of the cartoon TV series "Phineas and Ferb" back in 2011.

The same year Kelly Clarkson voiced a character in "The Star," she also released her eighth studio album, "Meaning of Life," which was her first with Atlantic Records and her first foray into soul and R&B music. Although it's one of Kelly's lowest selling albums to date, it still managed to reach No. 2 on the Billboard 200.

After appearing on "The Voice" as a mentor and adviser in 2012, Kelly Clarkson did it again in 2017 for Season 13. She then joined the NBC music competition series as one of the four coaches beginning in Season 14 in 2018. Although her decision was initially perceived as a slight to the show that made her a star, "American Idol," Kelly cleared the air by telling reporters she genuinely thought "Idol" was over (FOX aired a farewell season in 2016; ABC resurrected it in 2018) when she signed on for the rival series. Regardless of her motive, Kelly's presence on the show served as a powerful reminder to contestants that winning a show like this could lead to superstardom. She's been a wild success as a coach too: Her singers won Seasons 14 and 15!

You are looking at the next big name in daytime television. That's right, in 2018, Kelly Clarkson inked a lucrative deal with NBC to host her own talk show. "The Kelly Clarkson Show" will premiere in the fall of 2019.

Since winning "American Idol," Kelly Clarkson has been on a nonstop journey forward in her personal and professional lives. In 2019, along with raising her family, touring behind her album "Meaning of Life," coaching on "The Voice" and preparing to host her own daytime talk show, Kelly also lent her voice to the animated movie "UglyDolls," which hit theaters in May 2019. In April 2020, she'll voice Delta Dawn in the animated adventure "Trolls World Tour." Kelly's also rumored to be performing an original song for the film.

Gregg DeGuire/WireImage for The Recording Academy 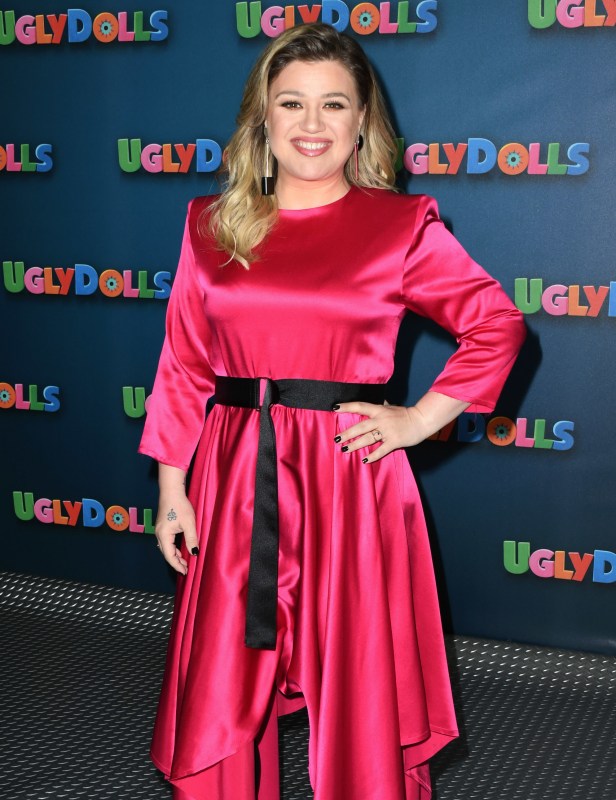 Up Next Kelly on top