The 51st Annual NAACP Image Awards take place on Feb. 22, 2020, and will once again honor stars of color for their powerful contributions to film, TV, music and literature. In anticipation of the annual award show, Wonderwall.com is revisiting NAACP Image Awards past to celebrate all the gorgeous fashion that's graced the red carpet… starting with "Black Panther" star Danai Gurira's breathtaking white ruffled Rodarte gown at the 2018 NAACP Image Awards. The off-the-shoulder dress perfectly showcased the actress's beautiful neckline, which was embellished by a large floral design at the bust. The asymmetrical ruffles at the skirt gave the dress a movement and fluidity that kept her silhouette soft and feminine. Keep reading for more great fashion moments…

Queen Beyonce doesn't even need to stand to show off the gorgeous red satin and rhinestone gown she wore to the 2009 NAACP Image Awards. The singer-actress won the award for outstanding female artist that night and maintained a sense of regal style with this glittering gown and sparkly diamond cuff bracelet.

RELATED: Stars are nothing like us: The Beyonce edition

We love everything about Yvette Nicole Brown's teal and orange ÖFUURË gown from the 2018 NAACP Image Awards. The "Mom" actress's African-inspired gown featured stunning patterns of traditionally beaded designs and was completed with fiery orange beaded earrings. Of her look, Yvette said she felt like "a melanin-rich queen on the carpet!" — and we can't help but agree.

Laverne Cox always brings her fashion best to any award show and that made it especially hard to pick which look we liked the best from her many appearances over the years at the NAACP Image Awards. However, this dreamsicle peach gown from Marc Bouwer that Laverne wore to the 2016 ceremony takes the cake. The single-sleeve drop-waist gown featured stunning line details and the faintest dust of sparkle, making Laverne — who was nominated that night for best supporting actress in a comedy series for her work on "Orange Is the New Black" — look ethereal on the red carpet.

Someone who knows how to arrive at the NAACP Image Awards looking like a snack is legendary beauty Halle Berry, who made everyone's head turn at the 1992 show in this sleeveless red figure-hugging gown and matching ruby and diamond earrings. The dress, which amplified Halle's perfect curves, also featured a sheer red train that contrasted with her black heels and clutch.

"Black-ish" star Tracee Ellis Ross won a NAACP Image Award in 2015 for best actress in a comedy series and had one of the best dresses of the night. The actress and daughter of Motown icon Diana Ross brought some drama to the red carpet in this heavily beaded pink gown with a plunging neckline and bold red lip.

We don't care what fashion critics said about Oprah Winfrey's dress at the 2014 NAACP Image Awards — we think she looked stunning. The media mogul and TV personality was on-trend in a burnt-orange belted gown with sheer panel inserts. The vibrant color of the dress matched Oprah's bright mood thanks to being nominated for entertainer of the year and best supporting actress in a motion picture for her work in "The Butler."

At the 2018 NAACP Image Awards, "This Is Us" star Susan Kelechi Watson had us doing a double-take when she arrived in this sexy wrap dress from Phuong MY. Susan's daring look featured a hip-high slit and belted waist, allowing her to show off her amazing legs. The actress, who was nominated for best supporting actress in a drama that night, completed her look with jewelry from Maxior and a handbag from Loriblu.

Ava DuVernay had a fashion moment at the 2015 NAACP Image Awards in this shimmering long-sleeved silver gown. The famed director, who took home the prize for best directing for her film "Selma" that night, picked the perfect dress that featured a corset waist and a high-low skirt that revealed her sexy, sparkling silver heels. Keeping her look elegant, Ava wore her long braids half up, half down and accessorized with drop earrings and chunky silver rings.

While Will Smith looked suave and sexy in black at the 2016 NAACP Image Awards, we're here to marvel at Jada Pinkett Smith's drop-dead gorgeous dark teal Marchesa gown. The strapless dress featured a full skirt of feathery ruffles, a waist-cinching cummerbund and a dramatically detailed bust that made Jada look like a total queen.

Screenwriter Lauren Morelli and her wife, "The Handmaid's Tale" star Samira Wiley, lit up the 2018 NAACP Image Awards looking like strawberries and lemonade in their bold-hued gowns. While Lauren's sleeveless, high-collared dress was a perfect match for the red carpet, Samira's sleeveless sunshine yellow Romona Keveža gown provided a juicy pop of color.

"Scandal" star Kerry Washington looked positively sweet in this pink and mint Oscar de la Renta gown at the 2013 NAACP Image Awards. Although some critics didn't like the look, we think Kerry was stunning in the two-tone gown with a scalloped neckline, high-low skirt and textured fabric.

"Orange Is the New Black" star Uzo Aduba was working some serious Old Hollywood glam at the 2015 NAACP Image Awards. The actress struck a demure pose in this beguiling whisper-pink gown by Zac Posen. The dress, which featured a voluminous hemline and delicate silver detail, gave Uzo a radiant glow.

The night she took home the 2014 NAACP Image Award for best supporting actress in a motion picture for her performance in "12 Years a Slave," Lupita Nyong'o looked like a statuesque beauty in a blazing orange gown from Givenchy. Lupita paired the fiery dress with matching orange sandals and (not pictured) a gold cuff bracelet.

At the 2016 NAACP Image Awards, actress Gabrielle Union proved that all-black is anything but boring. The "Being Mary Jane" star looked extra lovely in this lace and tulle gown from Rita Vinieris.

"This Is Us" star Lonnie Chavis might be one of the youngest celebrities on our list, but his shimmery red brocade tuxedo jacket made him one of the best dressed attendees at the 2018 NAACP Image Awards. The handsome youth balanced the bold jacket with otherwise all-black attire and an adorably toothy grin.

Can we get an amen for Octavia Spencer's stunning turquoise gown at the 2012 NAACP Image Awards? The actress, who won for best actress in "The Help" that year, went with her favorite designer, Tadashi Shoji, who created this gorgeous dress with heavy ruching and a rhinestone-belted waist specifically for Octavia.

"A Wrinkle in Time" star Storm Reid went for something whimsical at the 2018 NAACP Image Awards. The actress hit the red carpet in this playful black-and-white Yanina Couture gown that featured a simple satin little black dress under an embroidered organza overlay with a zig-zag high collar and bell sleeves.

Taraji P. Henson was clearly feeling herself in this gorgeous red Edition by Georges Chakra gown at the 2015 NAACP Image Awards. The actress, who won the entertainer of the year and best actress in a motion picture awards that year, paired her sleeveless gown with a chunky bracelet, delicate dangle earrings and a perfect fishtail braid.

"Insecure" star Issa Rae took a runway look straight to the red carpet in this shimmering Marc Jacobs dress. The actress and producer, who was nominated for three NAACP Image Awards in 2018, looked regal in this high-necked gown that featured half-length sleeves, a tie waist and a dramatic open back.

Is there anything sweeter than Zendaya in this floor-length blush gown? The then-15-year-old actress, who was nominated for best performance by a youth in a TV program, glowed in a cap-sleeved Queen Anne neckline gown with layers of tulle at the 2012 NAACP Image Awards.

Janelle Monae wore this geometric swirl of a dress by Ashi Studio Couture to the 2017 NAACP Image Awards. The high-neck, long-sleeved all-black gown featured layers of ruffles and textures that Janelle perfectly accentuated with her bold red lips and double-bun hairstyle.

Well, hello there, Bryshere Y. Gray. The handsome "Empire" actor and singer brought a pop of color to the 2016 NAACP Image Awards red carpet in this dusky minty-blue tuxedo jacket. And we couldn't help but notice the cool texture on his dress shoes. Not only did Bryshere look good — he also took home the award for best contemporary song that night.

"Moesha" actress Sheryl Lee Ralph always rocks amazing fashion, but this shimmering blue gown that showed off her killer physique at the 2001 NAACP Image Awards is one of our favorite looks. We especially love how Sheryl, who was nominated for best supporting actress in a comedy series, didn't over-accessorize the dress, allowing its thigh-high slit, dramatic train and woven waist to stand out on the red carpet.

Nominated for entertainer of the year, best actress in a drama series and best actress in a motion picture, Viola Davis knew she had to bring it when she hit the red carpet at the 2016 NAACP Image Awards. And in this sleeveless gown from St. John, she did just that. The "How to Get Away With Murder" star shined in a white dress that featured silver beadwork down the sides and hugged her curves.

"Orange Is the New Black" actress Danielle Brooks went from prison jumpsuit to red carpet princess at the 2018 NAACP Image Awards, where she was nominated for best actress in a comedy series. Donning this whimsical, fairy-tale of a gown by Michael Costello, which featured a gorgeous bodice of sheer organza decorated with floral embellishments and a flowing, layered skirt, Danielle proved size is no barrier to style.

Andra Day looked like a work of modern art at the 2018 NAACP Image Awards. The singer arrived at the show in a colorful sheer Giorgio Armani gown and Christian Louboutin Tres Frais red satin sandals that perfectly accentuated her dramatic makeup and embellished finger-wave hairstyle. The "Rise Up" singer was nominated that night for best duo or group and best female artist for her song "Stand Up For Something."

"Grown-ish" star Yara Shahidi looked incredible in this gorgeous off-the-runway gown from Vera Wang at the 2018 NAACP Image Awards. The dress, which featured a collar neckline, tulle paneling and layered ruffles, made Yara — who was just 17 at the time — look all grown up. We especially love her high ponytail and braids, which put Yara's amazing cheekbones on full display.

One actress who has always played by her own fashion rules is "This Is Us" star Chrissy Metz. At the 2017 NAACP Image Awards, Chrissy donned a pink chiffon cape dress from Michael Costello while working the red carpet like a true diva. Although Chrissy's mom reportedly didn't like her daughter's gown, we think she looked absolutely beautiful.

"Claws" star Niecy Nash made us do a double take during the 2018 NAACP Image Awards. Wearing this gold and cream gown from Mac Duggal featuring a thigh-high slit, Niecy shimmered with sophistication. 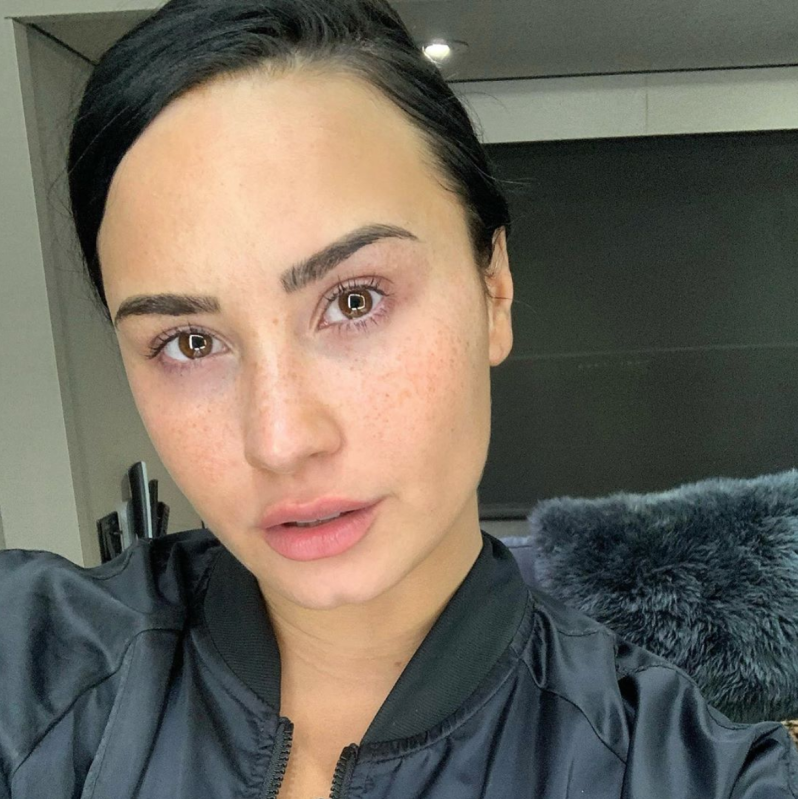 Up Next Au naturale