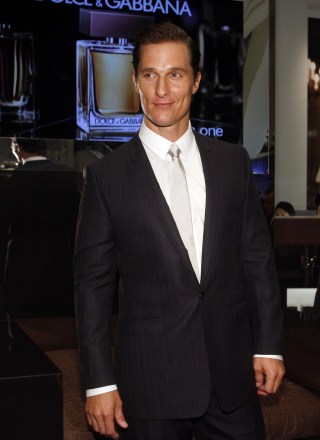 A chance meeting with director Richard Linklater is to thank for the multimillionaire-dollar leading-man career of Matthew McConaughey. That introduction got him cast in 1993's "Dazed and Confused" and his wry charm, onscreen ease and hunky good looks made Linklater beef up the part into the most memorable and most quoted character in the retro comedy. His line "Just Keep Livin'" is both his interview sign-off and the name of his production company. Since his debut, he's bounced between dramas ("A Time To Kill," "Contact," "The Lincoln Lawyer"), romantic comedies ("The Wedding Planner"), comedies ("Tropic Thunder"), thrillers ("Killer Joe") and vehicles to show off the super-toned bod he got from living by the mantra "Sweat every day." (Think "Magic Mike" and just about every other role he's taken. He's so charismatic that even his 1999 run-in with the law for playing bongos naked while allegedly high on marijuana is more likely to elicit a smile than a rant.  People's Sexiest Man Alive 2005 had dalliances with many high-profile partners like Ashley Judd and Penelope Cruz before marrying model Camilla Alve in June 2012. They have three children — Levi (b 2008.), Vida (b. 2010) and Livingston (b. 2012).