Keanu Reeves is celebrating a birthday! The star turns 56 on Sept. 2, 2020, and in honor of his big day, Wonderwall.com is taking a look back at his life in pictures. Keep reading to relive Keanu's greatest moments captured on camera…

Keanu Reeves was born in Beirut, Lebanon, in 1964 to a Hawaiian father ("Keanu" in Hawaiian means "cool breeze over the mountains") and an English mother. He bounced around with his mom after his dad left the family when he was just a kid, eventually landing in Toronto, where he cut his teeth acting in local theater productions, in commercials and on various Canadian TV shows. He's pictured here in 1986, the year he made his feature film debut in "Youngblood."

RELATED: "The Matrix" stars: Where are they now?

The same year Keanu Reeves made his feature film debut in "Youngblood," he appeared in two more films and four TV movies — most notably "River's Edge." Critics loved the low-budget crime-drama, in which a pre-fame Ione Skye made her big-screen debut.

Keanu Reeves closed out 1986 by appearing alongside Googy Gress and Jill Schoelen in NBC's "Babes in Toyland." He and the actress, who was later engaged to Brad Pitt, dated around the time that they co-starred in the made-for-TV movie.

After appearing in several forgettable films, Keanu Reeves finally scored a major breakthrough when he was cast as Le Chevalier Raphael Danceny — who memorably duels John Malkovich's Vicomte Sébastien de Valmont — in the lauded 1988 drama "Dangerous Liaisons." The young star may not have won any awards for his performance as the common-born music teacher, but the movie cleaned up at the Academy Awards, winning best adapted screenplay, best set design and best costume design. It also earned Oscar nominations for best picture, best original score, best lead actress for Glenn Close and best supporting actress for Michelle Pfeiffer.

Keanu Reeves officially arrived in 1989 when he and Alex Winter starred as the titular high school slackers in "Bill & Ted's Excellent Adventure." The beloved comedy spawned a 1991 sequel, "Bill & Ted's Bogus Journey," and an eponymous two-season animated series on which Keanu voiced Ted. He and Alex returned as their iconic alter egos in 2020's "Bill & Ted Face the Music."

Keanu Reeves convinced his pal River Phoenix to co-star with him in the edgy Gus Van Sant-directed 1991 indie drama "My Own Private Idaho," which went on to win three Independent Spirit Awards: best screenplay, best music and best male lead for River, who died two years after the film debuted. The two young stars were incredibly close leading up to his death.

Keanu Reeves starred as Jonathan Harker, who marries Winona Ryder's Mina, in the 1992 gothic-horror film "Bram Stoker's Dracula." In mid-2018, the actress said she was "convinced" that she and her co-star "really did get married" while shooting the Francis Ford Coppola-directed drama because they filmed with "a real Romanian priest" who officiated an entire wedding ceremony for them so that filmmakers could pick and choose which parts of the scene they wanted to use for the movie, which went on to win three Oscars. Keanu and his "wife" have since co-starred in three more films together.

Around the time that Francis Ford Coppola directed Keanu Reeves in "Bram Stoker's Dracula," the young actor became friendly with the famed director's daughter, Sofia Coppola. The duo arrived arm-in-arm to the Seventh Annual Independent Spirit Awards at Raleigh Studios in Hollywood on March 28, 1992, but despite how things might have appeared, the pair have denied that they were ever anything more than friends.

But not everything was perfect for Keanu Reeves as his career took off in the early '90s. He put his modeling skills to use when he posed for a mug shot after he was arrested for DUI in Los Angeles on May 5, 1993.

Keanu Reeves also enjoyed moderate success with his alternative rock band, Dogstar, which formed in the early '90s and even performed at England's Glastonbury Festival in 1994 (pictured). They released an EP and two albums before quietly disbanding in late 2002.

Keanu Reeves officially became an action star after he headlined 1994's "Speed" — which is still one of his top-grossing films — opposite Sandra Bullock. More than a decade later, the duo, who've faced several rounds of romance rumors over the years, reunited in the 2006 romantic drama "The Lake House." In late 2018, the Oscar-winning actress clarified that they "never dated" — even though she had a crush on him when they worked together on "Speed."

Keanu Reeves starred opposite Cameron Diaz in 1996's "Feeling Minnesota," and, yep, there were unconfirmed rumors around the time that they were dating.

A year after he infuriated 20th Century Fox execs by passing on "Speed 2: Cruise Control" so that he could star in a Canadian production of "Hamlet," Keanu Reeves posed with Kenneth Branagh at the premiere of a big-screen adaptation of the Shakespeare play at the Walter Reade Theater at New York City's Lincoln Center on Dec. 10, 1996. (Kenneth directed and starred in the production.) In early 2019, Keanu told GQ that Fox refused to work with him for a decade after he turned down the action sequel. He finally reunited with the studio for 2008's "The Day the Earth Stood Still."

Charlize Theron starred opposite Keanu Reeves in the 1997 thriller "The Devil's Advocate." A few years later, they reunited for the 2001 romantic drama "Sweet November." As is frequently the case for women with whom Keanu has starred in more than one film, there have been several rounds of rumors over the years claiming that Charlize was more than a friend.

Keanu Reeves reached an all new level of fame after he starred as Neo in 1999's "The Matrix." The groundbreaking sci-fi flick won fans around the globe, scored four Oscars and went on to spawn two sequels.

Keanu Reeves' sisters, Kim and Karina, joined him at the premiere of "The Matrix" in Los Angeles on March 24, 1999.

Keanu Reeves faced personal tragedy on Christmas Eve 1999 when his daughter with girlfriend Jennifer Syme was stillborn. In the wake of their grief, the couple parted ways romantically but remained close until Jennifer's death in a 2001 car crash. Keanu and Jennifer are seen here in November 1998, the year they met.

Keanu Reeves brought longtime pal Amanda De Cadenet as his date to the premiere of "Hardball" at Paramount Pictures Studios in Hollywood on Sept. 10, 2001. In her 2017 memoir, the English actress revealed that despite her many attempts to woo Keanu, they only ever went on one date.

Another one of Keanu Reeves' longtime platonic gal pals is Parker Posey. The duo, who became friends after she botched her audition for "Speed," attended the 40th New York Film Festival premiere of "About Schmidt" together on Sept. 27, 2002.

Six years after they co-starred in the 1997 biopic "The Last Time I Committed Suicide," Claire Forlani joined Keanu Reeves at the Los Angeles premiere of "The Matrix Reloaded" on May 7, 2003. The duo have been seen together several times over the years, though as is often the case when it comes to the women in Keanu's life, they've denied that they were ever anything more than friends.

Keanu Reeves portrayed a younger man wooing Diane Keaton's character in the 2003 rom-com "Something's Gotta Give." According to some reports, life imitated art for the two actors, who were rumored to have briefly dated in 2005.

Keanu Reeves and one of his sisters, Kim, grabbed Starbucks in Los Angeles on July 5, 2004. The A-list actor supported his little sis during her nearly decade-long battle with leukemia — she reportedly inspired him to quietly create a private charitable foundation to benefit cancer research as well as various children's hospitals.

Keanu Reeves' mother, Patricia Taylor, supported him as he received a star on the Hollywood Walk of Fame on Jan. 31, 2005.

These two were definitely more than friends! Keanu Reeves held hands with actress Lynn Collins, with whom he connected while shooting the 2006 love story "The Lake House," at the afterparty following the opening night of the Shakespeare in the Park production of "As You Like It" at the Delacorte Theatre in New York City on July 13, 2005.

Keanu Reeves teamed up with co-star Kelli Garner (third from right) to promote "Thumbsucker" at the Toronto Film Festival on Sept. 13, 2005. Around the time, there were unconfirmed rumors that the duo were an item.

Stop us if you've heard this one before… A few years after Nancy Meyers directed Keanu Reeves in "Something's Gotta Give," the actor was seen smooching her daughter, Hallie Meyers-Shyer, following lunch at Patis in New York City on Oct. 24, 2007.

Keanu Reeves is seen here reading a copy of "Ode to Happiness" — a picture book for adults he released with artist Alexandra Grant — in London on June 18, 2011. The duo collaborated again — she created the visuals while he provided the text — on 2015's "Shadows." They collaborated on a romance a few years later…

Keanu Reeves was all smiles while riding his motorcycle in Beverly Hills on Oct. 6, 2011 — the same year he launched his own motorcycle manufacturing company, Arch Motorcycle.

Keanu Reeves made his directorial debut with the help of his close friend and martial arts instructor Tiger Hu Chen, whom he met on the set of "The Matrix." The A-list actor directed his pal in "Man of Tai Chi" — Tiger starred as the title character while Keanu portrayed the villain. They posed together at the action-drama's Toronto International Film Festival premiere on Sept. 10, 2013.

After several years of starring in mostly under-the-radar indie films, Keanu Reeves scored a major comeback of sorts with 2014's "John Wick." The action flick was a hit with critics and at the box office, developing a cult following and landing two sequels with a third slated for 2022.

Keanu Reeves read a copy of "The Artists' Prison" — a book published under his X Artists' Books banner — at the Palais de Tokyo in Paris on Nov. 10, 2017. He and his partners launched the "small publisher of thoughtful, high-quality, artist-centered books that fit within and between genres" in the summer of 2017.

Keanu Reeves was immortalized with a handprint and footprint ceremony at the iconic TCL Chinese Theatre in Hollywood on May 14, 2019.

Keanu Reeves returned to the role of John Wick in May 2019's "John Wick: Chapter 3 – Parabellum."

Keanu Reeves fans went wild when it was confirmed in 2019 that the actor was in a long-term romantic relationship with artist Alexandra Grant. The pair are seen here holding hands on the red carpet at the LACMA Art + Film Gala in Los Angeles that November. In 2017, Alexandra and Keanu launched a publishing company together, X Artists' Books. She's also contributed to two books he authored previously.

Keanu Reeves returned to another one of his popular franchises in August 2020 in "Bill & Ted Face the Music." He reprised his role as the lovable Ted alongside Alex Winter's Bill. 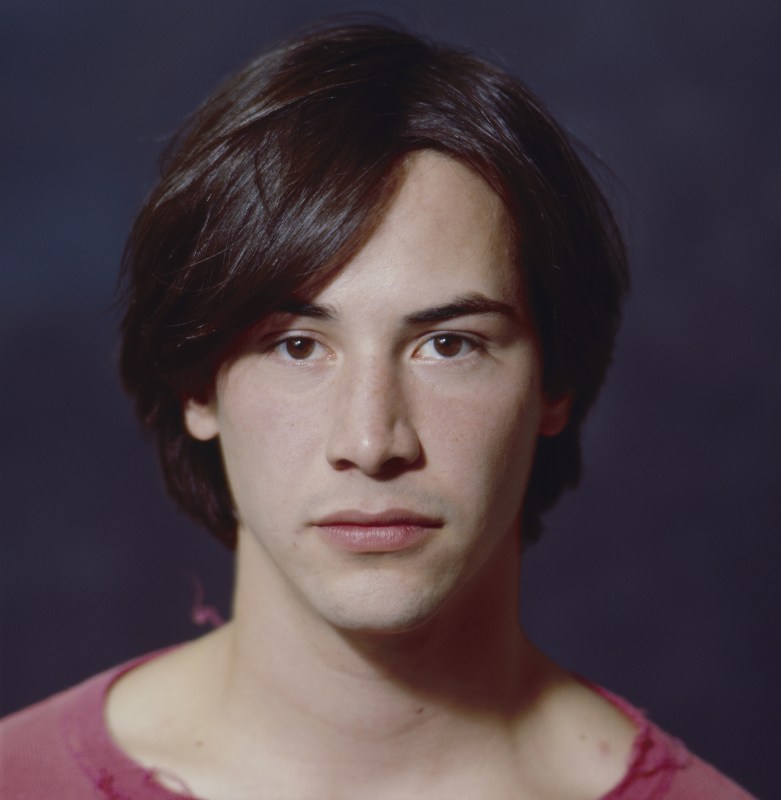 Up Next Life in Pics