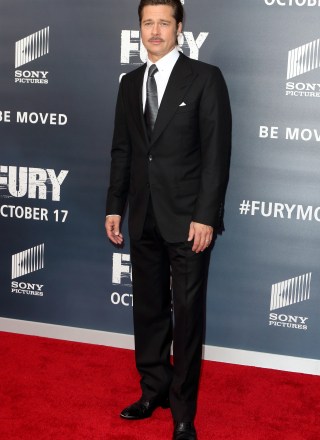 Share Tweet Pin Email
Pretty sure that there is a parallel universe where Brad Pitt completed his journalism degree at University of Missouri and then went back to school to turn his obsession with architecture into a career. Lucky for fans of the two-time Sexiest Man Alive, they live in the one where he drops out, heads to Hollywood and scrapes by with odd jobs including chauffeuring a limo for a strip-o-gram service before landing an arc in 1987 on "Dallas." Since being ab-fab as the hunky hitchhiker in 1991's "Thelma & Louise," his calendar has been booked solid. He fished in "A River Runs Through It," sucked blood in "Interview With A Vampire," boxed in "Fight Club," Greeked out in "Troy," hunted a serial killer in "Se7en," cowboyed up as Jesse James, killed Nazis in "Inglourious Basterds" and portrayed a smooth criminal in "Ocean's" franchise. He's been nominated for four Oscars ("Twelve Monkeys," "The Curious Case of Benjamin Button" and "Moneyball"). His social calendar is always packed as well. He dated Robin Givens, lived with Juliette Lewis for three years, was engaged to Gwyneth Paltrow and was married to Jennifer Aniston for five years. After separating in January 2005, things moved pretty fast with his "Mr. & Mrs. Smith" costar Angelina Jolie. By 2008, the pair were co-habitating, co-parenting six children (three adopted and three biological), co- creating projects like "A Mighty Heart" and co- lobbying for causes around the world though they didn't get engaged until 2012, the same year he became Chanel No./ 5's first male spokesperson.