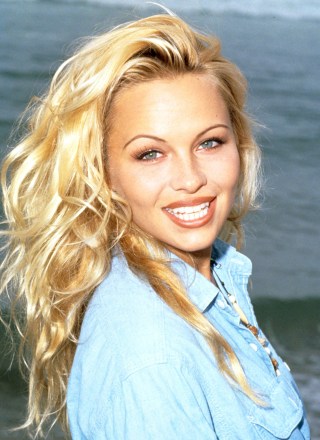 Share Tweet Pin Email
Popping up on a JumboTron at a 1989 football game wearing a Labatt beer tee jumpstarted Pamela Anderson's career. The brewing company tracked her down to put her in commercials and Playboy came calling shortly after with a cover offer. (She has graced the front a record 12 times.) She also met her first famous boy toy, Scott Baio, at Hef's mansion. After playing Tim Allen's Home Improvement Tool Time girl from 1990-93, she donned a red swimsuit for Baywatch and ran in slow-motion straight onto the A-list. She inspired an animated Stan Lee-created show Stripperella (2003) and published a novel, Star, in 2004. Perhaps it helped her book her 2005 pun-intended gig Stacked, a comedy about a busty babe who works in her family's bookstore. She starred in a Vegas magic show, became a cult favorite as the title character Barb Wire (1996) and a late-night guilty pleasure on V.I.P. from 1998-2002 and competed on the 2010 and the all-star editions of Dancing with the Stars. Previously girlfriend to Bret Michaels and David Charvet, she married Motley Crue drummer Tommy Lee after a four-day courtship in a bikini, a tumultuous union that resulted in a 1997 leaked sex tape, children Brandon (born 1996) and Dylan (born 1997), spousal abuse claims, a 1998 divorce, a 1999 reconciliation after she underwent breast reduction surgery, Hepatitis C, a bitter custody battle in 2003 and another reconciliation while filming an E! reality series in 2008. Anderson moved on with dalliances with surfers Kelly Slater and Jaime Padgett and brief marriages to Kid Rock (who she married in three ceremonies) and Rick Saloman.